Singaporean Teens are Bigger Gaming Addicts than Their U.S. Peers

Teenagers all over the world are becoming addicted to gaming, and Singapore’s teens are not exempt from this worldwide phenomenon — In fact, studies show that Singaporean teens spend more time gaming than their American counterparts, 20 and 13 hours respectively. Traditionally, we associated addictions with substances such as alcohol and drugs but with the increased use of technology in our everyday lives addictions to such things as the internet, smart phone and gaming are becoming more common. Unlike alcohol and drugs, children and teenagers are not warned about the dangers of spending too much time gaming or know the warning signs of such addictions and neither do parents. Singapore’s addiction management service describes gaming addiction as “the extreme use of computer and video games that interferes with daily life” but does not mention teenagers being more vulnerable to a gaming problem. But how to tell if your teen is addicted to gaming? How much time playing is too much and if you think your teenager has a problem, how can you help them?

Gaming addictions do not just affect teenagers, but there tends to be a trend toward teens and university students using games as a way to escape stress from school life. Adults also tend to be better at functioning with addictive behaviours and juggling responsibilities than teenagers. However addiction signs are the same in adults and teenagers and there have even been a few dire cases of adult addictions resulting in death. Here are some of the most common warning signs that your teen’s gaming is becoming an addiction. 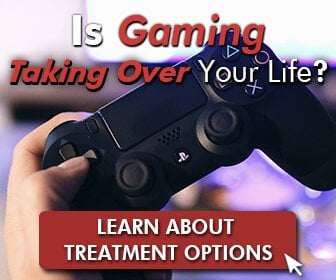 Feelings of restlessness and/or irritability when unable to play

Becoming irritable, restless or even angry when they are unable to play is one of the most common signs of a problem. An addiction makes people crave the game or feeling related to the game and so suffer negative consequences when they are unable to play. If your teen is showing anger when you forbid them to play or take their gaming device away then it is a good idea to seek help for them.

Lying or hiding their habit

Teenagers are good at hiding things from their parents but even they might realise that their gaming is becoming a habit when they start lying about time spent gaming. Often the lies extend to their friends and peers and they start to isolate themselves in order to spend more time gaming. Often teens will try to also defend their habit to parents or spend time around a friend’s house to hide the amount of time spent gaming.

If you are getting reports about your teen not completing homework or being sleepy at school then this can signal a problem. Does your teenager come straight home from school and play games? Or do they stay up late at night playing instead of resting up for school? These are warning signs that there could be a problem.

As well as angry or irritable, is your teenager looking tired, complaining about eye strain, back ache or fatigue? These can signal that they are spending too much time in front of a screen. Another sign is poor personal hygiene that often relates to a preoccupation with gaming rather that real life.

Is your teen spending increasing amounts of time alone or on their computer, ‘playing’ against friends? Gaming and online addictions often cause social problems as people have less face to face interactions and so become less social. Increased use of technology or an addiction to gaming might also result from teens being shy and finding it hard to interact with people in the real world, but parents should try to foster social interactions as much as possible.

“Parents are quick to point the finger at the games, but gaming addiction can stem from something deeper. If the problem is not identified correctly, then it’s hard to solve.”

If you think your teenager is developing a gaming problem then it is advisable to speak to them about it as soon as possible to raise awareness. Sometimes teens have no idea about the negative effects of their actions and just by mentioning the problem it might make it the first step for them to reduce their gaming. In other cases teenagers may become irritable or angry, and defend that there is no problem.

Limiting their computer use or banning it for a week may work but being teenagers they will find a way around the ban, and resume gaming as soon as their access is restored. Abstinence may work for some teenagers but with gaming cafes and access from friends the ban must also be accepted by your teen.

South Korea has started to send addicted teenagers to rehabilitation camps especially to treat the problems and causes related to gaming addictions. This is also an option for Singaporean teens but there is a high rate of teenagers returning to their normal environment and resuming their previous gaming behaviour.

Overall the best course of action is an early intervention programme where the teenager goes through treatment with a professional to identify the problem, triggers associated and how to handle the temptations surrounding the gaming addiction. The Cabin Singapore’s early intervention treatment has recognised the rise in gaming addictions and developed an effective after school programme for teenagers and their parents in Singapore. Identifying triggers such as school stress or shyness and giving teenagers the tools and confidence to overcome them in healthier ways then retreating to gaming will help your teen cope in daily life and in the future.

If you are worried about your teenager and suspect that they might be suffering from a gaming addiction then contact The Cabin Singapore today to learn about how our early intervention treatment can help your teenager overcome their gaming problems.