Digital Dementia – Are you at Risk?

Our overuse of and reliance on the internet may be reshaping our brains. Researchers speculate that as many as 15% of internet-addicted people are at risk of developing early onset dementia. Are you one of them? 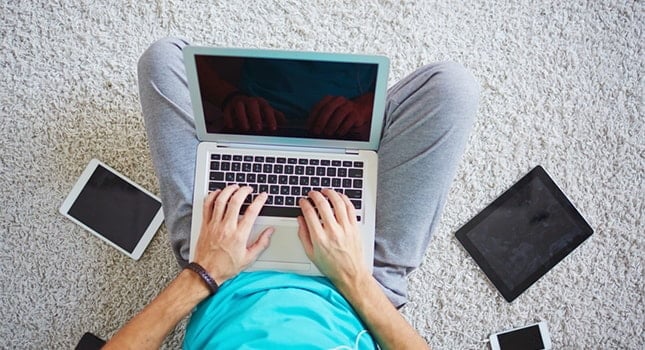 We are all familiar with dementia, the memory-loss- and personality-change-inducing brain disorder feared by so many approaching old age.  But what is digital dementia?

The term ‘digital dementia’ was first referenced by Manfred Spitzer in 2012 in his book by the same name.  His theory is that overuse of digital technology is causing a breakdown of cognitive abilities and short-term memory. Since the internet and smartphones are relatively new additions to our lives, there is limited research detailing all of the possible long-term effects overuse might have. However, worldwide, there is an increasing amount of people coming forward with internet addictions, and research has already shown a link between smartphone addiction and depression.

What Spitzer proposes is a new kind of problem, and one far more damaging to our brains than we first thought.  He believes that reliance on the internet for answers to common problems, or to find and save information, causes a brain imbalance.

The left side of the brain focuses on rational and linear skills such as fact finding, which is actually developed more though internet use.

The right side of the brain, however, is the side that suffers.  It accounts for memory, concentration and attention span, as well as intuition and emotional response. Because of the way the websites we constantly interact with are designed (to keep us engaged while bombarding us with distractions in small snippets), the right side of the brain gets underused and does not develop equally. This could lead to as many as 15% of internet-addicted people developing early onset dementia.

Also in the past, most people remembered phone numbers, events, meetings and other important information. That memory function has since been replaced by smartphone data storage and calendar alerts. Reliance on internet technology causes us to use our brains differently.

While South Korea is the frontrunner in internet and smartphone addictions, Singapore is not too far behind.  A recent study shows that 43% of respondents spend more than six hours a day on the internet. Another study showed that 84% of Singaporeans sleep with their smartphone within reach, and almost half of them check their phones in the middle of the night. Singaporeans need to pay special attention when it comes to digital dementia, because despite being a small nation, Singapore ranks number one globally for smartphone penetration.

With South Korea already seeing many cases of digital dementia that look similar to people who have suffered head injuries or psychiatric illnesses, it seems only a matter of time until the disorder starts to make an impact in Singapore, too.

Can Digital Dementia be Stopped?

Spitzer advises that technology should be removed from classrooms and not given to young children. He also favours more traditional ways of communicating, like dialling a number and talking in lieu of instant messaging.  And certain activities can improve connectivity in the right side of the brain.

As more and more jobs and technological vices keep us hooked online, we need to be smarter about unplugging and training our brains to counteract digital dementia. Following are four exercises to help stimulate the right brain.

1. Think before you search.

Taking the time to recall information or to think deeply about a question, rather than going straight to Google, is essential to keep the right side of the brain active. Recall forces the brain to actively search within and access previously stored information.

Reading paper books has been shown to improve concentration and memory. The effects are not the same when using a kindle or reading online as there are other distractions and buttons to press. A real book offers a tactile experience different than looking at a screen, and the only source of stimulation is the story itself.

By learning a new language or a musical instrument, you open up channels of memory retention that are not often used. Learning languages challenges you to retain information that is totally new – a great way to strengthen your brain.

Moving your body improves your circulation and gets more blood and nutrients flowing to the brain. Sports like tennis, football or even throwing a frisbee around will improve concentration and coordination.  Dance is especially good for the brain as it involves cerebral and cognitive thought processes as well as muscle memory.

While all of these things are useful on their own, they should be practiced in conjunction with limiting your technology use. Taking note of how much screen time you amass and what you use the internet for is the first step to reducing your time plugged in.

If you feel like you are spending too much time online and are unable to stop yourself checking Facebook or notifications, or if you feel anxious when your phone battery is dying or your phone is out of reach, then you may be suffering from an internet addiction. Internet addictions are classified as process addictions whereby over time people become addicted to being online and suffer effects such as anxiety or depression as a result.

At The Cabin Singapore, we recognise that we live in a modern world in which complete abstinence from the internet is not possible.  That is why we have developed a very specific treatment method called Recovery Zones, which allows for this factor to be taken into account when treating internet addiction.  Addiction is a progressive disease and will only get worse with time if left untreated. If you feel you may be suffering from internet addiction, contact us today to receive a no-obligation consultation and see how we can help you get back on the right track.

Is Your Child Addicted to Their Smartphone?

What Would You Choose: Sex or Smartphone?

Broadband networks in Singapore cannot keep up with Smartphone Addictions