Can Your Job Make You an Addict? Are Some Careers More Likely to Lead to Addiction?

While some professions are certainly more stressful than others, is it possible that the rigors of some are more likely to lead to addiction? Is your job causing you to reach for the bottle or drugs? Find out which jobs are more likely to cultivate addiction and why. 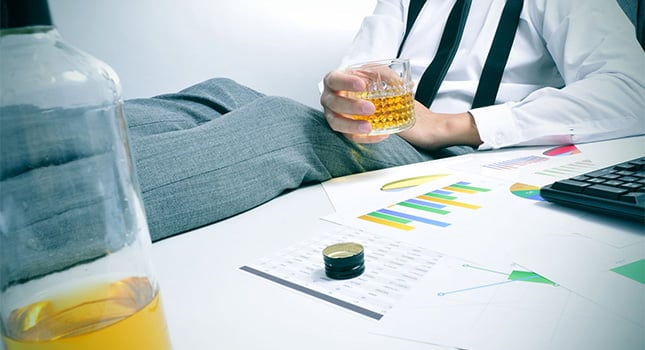 Numerous studies over the years have revealed that some jobs are more stressful than others. But what about how this relates to addiction? In 2015, for example, a study revealed that top managers and business owners in Singapore are the most likely to become addicted to substances.

Many of us unwind with a glass of wine, a beer or even some marijuana after a stressful day at work. Still, could certain professions lead people down the slippery road to substance addiction, or does responsibility exist with the individual? Which professions actually have the highest substance abuse and addiction rates? The results may surprise you.

Employees in the food and service industry have the highest rate for the use of substances. A National Survey on Drug Use and Health done in the U.S. by the Substance Abuse and Mental Health Services Association’s (SAMHSA) showed that 16.9% of food and service workers in the last year have used illegal substances (followed closely by the construction industry at 14.3%). There are many speculations for this phenomenon, from the late hours worked, cash in-hand from tips, to the generally flexible hours involved in this industry.

In a comprehensive study of various industries in the USA, those working in mining and construction had the highest rates of heavy alcohol abuse. While jobs in this sector may not be stressful in the same ways as an office job, great physical demands are often put on employees, including being in potentially dangerous working conditions.

People working in the entertainment industry also have a high rate of alcohol and other substance abuse. Often, this sector of the economy relies on performing, so drugs can be used for stimulation or relaxation. There is also research showing that these types of businesses are less likely to conduct random drug testing. In one study, one-third of illicit drug users surveyed said that they would be less likely to work for employers that conduct random drug tests.

In a survey of the most stressful jobs, a range of different healthcare professions were ranked in the top-20 most stressful jobs. Long hours, being on-call, the amount of responsibility a healthcare employee has, easy access to prescription medications; plus the potential for things to go wrong in an instant can lead workers to reach for drugs, both legal and illegal. The American Nurses Association (ANA) says approximately 10% of nurses are dependent on drugs, while it is estimated that between 10-15% of all healthcare professionals are addicted to alcohol or other drugs.

This sector of job positions is commonly thought of when considering ‘high functioning addicts.’ These are professionals who are able to hide their alcohol or drug abuse and continue working and functioning in life normally. A celluloid example would be the 2013 movie, “The Wolf on Wall Street,” which shows the character played by Leonardo Dicaprio do a phenomenal amount of drugs and alcohol while rising to the top of his industry.

A Singapore Mental Health Study in 2009-10 showed that people in senior or top management positions had the highest instance of dual diagnosis, which is having a psychological condition coupled with a substance addiction.

While these days, due to technology, flying to some people may seem straightforward, the cabin crew actually carries a lot of unseen stress. Flight attendants are frequently fatigued and state long hours, days away from family, as well as rude and drunken passengers as common sources of stress.

Pilots on the other hand, in addition to the stressful job of flying the plane, harbour the weight of knowing that making one wrong move could kill hundreds of people. Along with the pressures of the industry, an increasing number of pilots are turning to alcohol. What is probably most notable is that airline workers are more likely to slip into a habit without themselves or other people even realising it.

The final category with the highest percentage of alcohol use and abuse is that of business owners. Similar to the managers and high level executives, the amount of mental stress for business owners is high. There is also a strong, acceptable, drinking culture of wining and dining prospective business partners. In general, the higher-up the individual is on the business ladder the larger the potential for failure.

While these jobs are the most likely to lead to alcohol or drug abuse, not everyone ends up getting addicted — as genetics also play a huge determining factor in the disease of addiction. Remember that it is important to manage your work stress in healthy ways, such as by exercising. It is also important to monitor your own consumption of alcohol (or other drugs).

It is essential that people are aware of what constitutes responsible drinking, what is addiction, and how to seek help if you or someone has a problem. The Cabin Singapore offers discreet outpatient help for high-functioning individuals suffering from addiction, and our treatment programme can be worked around their demanding schedules.  If you feel like you or someone you know has a problem, make contact today for advice or to book an appointment.

What Puts Expats at Higher Risk for Addiction?

Top Managers Most Affected by Alcoholism and Mental Disorders in Singapore