Will Heroin Make a Comeback in Singapore?

Singapore arguably has the some of the toughest drug laws on the planet. Penalties for possession and trafficking can result in imprisonment or death. Despite the consequences, heroin may be making a comeback in Singapore. Is there any nation in the world harder on drugs than Singapore? Even with its war on drugs and harsh penalties, Singapore still has its share of drug dealers, offenders and users. With its proximity to the Golden Triangle, Singapore was at one time a thriving opium distribution centre. Since gaining its independence in 1965, however, the small island nation has been dedicated to drug enforcement. A sudden heroin epidemic in 1975 affected 3% of its male population within two years. After rehabilitation, those arrested continued to be supervised and subjected to urine tests for years. While efforts appear to have controlled the epidemic back then, heroin be making a comeback in Singapore today.

Recent news has been flooded with reports of heroin seizures in record breaking quantities. Just last month authorities raided an international drug syndicate’s main distribution centre between Johor and Singapore. What they found was high-grade heroin named ‘China White’. Because of it purity, China White can be cut with other substances and still maintain enough quality to maximize yield and profits. Once cut, it is sold on the street as ‘Heroin No. 3’.

Heroin ranks second only to methamphetamine as the most common drug used in Singapore today. It’s relatively low cost (0.2 grams for S$20) makes it an attractive alternative to most costly synthetic drugs – and it is easy to get. New technologies and apps seamlessly network between users and suppliers all the while luring in young customers. In 2016, 40% of drug abusers arrested in Singapore were new users and of that 64% were under 30.

Heroin is highly addictive. Even a single dose can begin the cycle of dependence and addiction. It is crucial to understand that addiction is a brain disorder and not a reflection on a user’s will or character. If you or a loved one are struggling with heroin, seeking immediate treatment is the wisest step you can take towards recovery. The Cabin Singapore offers outpatient treatment for heroin addiction that is convenient, cost-effective and confidential.

The Dangers of Heroin Abuse and Addiction

Heroin is an opiate processed from morphine extracted from the poppy plant. Once smoked, snorted or injected, heroin activates the natural opioid receptors in the brain to numb pain and produce feelings of intense pleasure. Over time, larger doses are required to produce the same euphoria. An addiction can easily take hold, and death is often close behind. Approximately 50% of heroin addiction cases left untreated end in death, most commonly due to overdose.

Heroin devastates the body and mind and can result in both short and long-term damage: 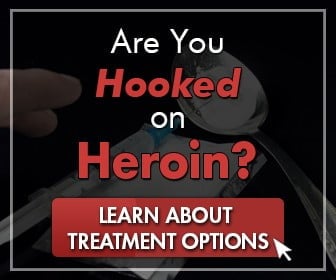 Heroin should never be stopped suddenly without being monitored by an experienced addiction counsellor or support worker. While the withdrawal itself is not considered life-threatening, dangerous to severe complications can occur.

Withdrawal symptoms typically appear within the first 6-12 hours, peak in 1-3 days and subside in a week’s time. Post-acute symptoms, however, can last for weeks, months or even years. The type of symptoms and timeline are contingent on the quantity of heroin used and the length of time used. Withdrawal symptoms from heroin can include:

The Legal Dangers of Heroin in Singapore

Singapore’s Misuse of Drugs Act was established to punish both the drug trafficker and the drug consumer. It outlines punishable offenses for importing, exporting, trafficking, manufacturing, possessing or consuming controlled drugs of any kind. Current penalties for heroin are severe and based on the quantity confiscated:

May face the death penalty

The Cabin Singapore is part of The Cabin Addiction Services Group, widely recognised for being at the forefront of addiction treatment. Our Western-trained counsellors have decades of combined experience treating addiction of all types.

Outpatient centres are one of the most cost-effective options for heroin addiction treatment. In some cases, treatment may be covered by your personal insurance plan. Our Outpatient Treatment Program is designed to last approximately six months, beginning with one personal and two to three group counselling sessions per week. Depending on how well each individual is responding to treatment, the number of sessions per week may be decreased over time at the counsellor’s discretion.

Sessions can be scheduled outside of regular working hours ensuring that even the busiest of individuals can find time to get the treatment they require whilst still keeping up with their family and work responsibilities.

The Cabin Chiang Mai offers inpatient treatment best suited for those who are not able to manage their addiction within the context of their regular environment. Inpatient addiction treatment at a residential rehab facility allows the individual to focus completely on their recovery in an environment free from the stress and triggers inherent in their daily life.

We can help if you or someone you love needs to break free from the power of heroin addiction. Contact us today and one of our trained professionals will guide you through the options available that best fit your needs. A new life is possible for you or your loved one.

Singaporeans Are Warned Against Cannabis Use Overseas Despite Legalisation