Is Your Child Addicted to Their Smartphone?

Singapore youths are becoming addicted to smartphones at increasingly younger ages. What are the long term effects and how do you know if your child is at risk? 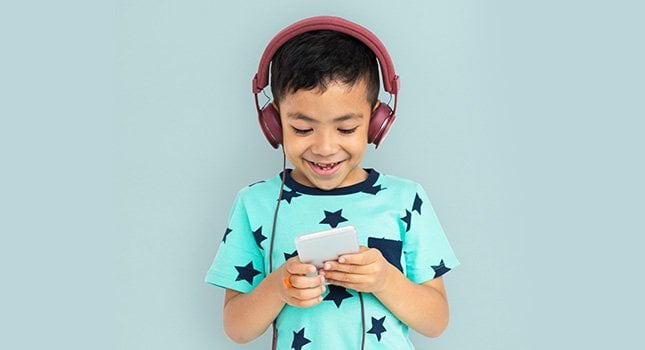 When the parents of a five-year-old boy in Singapore asked him to put down his phone, he threw it across the room and smashed it. They promptly placed him in treatment for smartphone addiction. He was successfully weaned from his phone and now on the road to recovery. It seems strange to think that a child at the tender age of five can be addicted to anything. But smartphones are becoming a habit-forming high that is being embraced by the very young at alarming rates.

Treatment may seem to be an overreaction, but with 35 hours a week spent on their phones, Singapore’s kids’ online usage is higher than the global average and the number of parents seeking help has grown in recent years. Touch Wellness, Singapore’s pioneer and leading non-profit agency, reports that cases of excessive use of mobile devices have more than doubled in three years.

Addiction to a device can cause damage in a young brain that may have long term effects on learning and language development. Excessive use of smartphones can also lead to isolation which can impact their ability to form healthy social, career and intimate relationships in adulthood. How can parents educate themselves in the warning signs, risks and treatment of smartphone addiction?

What is Smartphone Addiction?

Smartphone addiction is a compulsion to continuously check and be on your phone. It targets the same pleasure centers of the brain as drugs or alcohol do. It creates a high or buzz that depletes when you put your phone down and you get your next fix by picking it back up again.

Smartphones are designed to hook us. We are conditioned to repeatedly check for new games, text messages and Instagram updates throughout the day. You might think, “Sure we all check our phones multiple times per day and get anxious when we misplace them, but does that mean we’re addicted?” You might be. A recent study claims that 50% of teens feel that they are addicted to their smartphones. And 94% of American college students reported feeling troubled when not carrying their phones with them. Dependence on your phone, the internet, social media and games can lead to the disorder, nomophobia. The term, an abbreviation for no-mobile-phone phobia, is the irrational fear of being without or unable to use your smartphone. This can lead to severe anxiety, angry outbursts and even depression. It can affect someone’s daily activities, face-to-face social connectedness, productivity, sleeping patterns, and feelings. And children are the most susceptible because “they lack self-regulation and consequential thinking.” 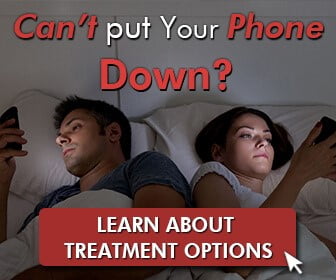 Additionally, smartphone addiction alters the way we interact with each other, especially amongst children. The screen becomes their whole world to the exclusion of real people and things. It creates a disturbing gap between human and digital interactions. Time spent in isolation from reality can harm a child’s growth and development. They do not engage in long conversations and this lack of verbal stimulation can affect their ongoing language development. The absence of human contact is also worrying. Interaction with real humans helps a child develop, both emotionally and behaviourly. Gaming, texting or social networking does not allow a child to see emotional reactions from real people that can help communicate which behaviours are proper and which are not. This can have serious consequences when they try to form healthy relationships throughout their lives.

Do you worry that your child has an unhealthy dependence on their smartphone?
Answer yes or no to the following questions:

If you answered yes to at least four of these questions, your child may be suffering from smartphone addiction. The sooner you get help, the better the chances they will become a healthy, happy and productive adult.

What does Smartphone Addiction Do to the Brain?

Like any addiction it causes an imbalance in the chemistry of the brain. The constant connectivity to the Internet, social media, games, etc. targets the reward center of the brain creating a high that is continuously sought, and conversely, can produce feelings of withdrawal when that connectivity stops.

Last year in South Korea, a study was conducted to test the brains of internet and smartphone addicted teenagers. They used a technique called magnetic resonance spectroscopy (MRS) to scan the brains of the test subjects to identify and track the movement of biochemicals within the brain. They were found to have an abundance of gamma-aminobutyric acid (GABA) in the brain’s emotional control center. GABA is a neurotransmitter linked to anxiety and depression. It is found in everyone’s brain, but too much can have adverse effects to your mental state. Researchers found that addicted teens were more likely to suffer from anxiety, depression, impulse control problems and insomnia.

There is good news. The South Korean study revealed that the chemical imbalance caused by smartphone addiction is reversible using cognitive behavioural therapy (CBT). Teens that engaged in CBT, mindfulness exercises and alternative activities were able to correct the imbalance and break free from their addiction. With appropriate intervention, the chemical changes were corrected. There is hope for you and your child.

Treating Smartphone Addiction at The Cabin

The Cabin Singapore offers both inpatient and outpatient treatment options to help your child regain control of their life. We have developed a unique treatment method called Recovery Zones which blends extremely well with the CBT and Mindfulness Meditation that we offer. To find out more about whether someone you love could benefit from a healthier relationship with their smartphone, contact us for a consultation today.