Is laughing gas addictive? A recent case uncovered in Singapore suggests that it is. 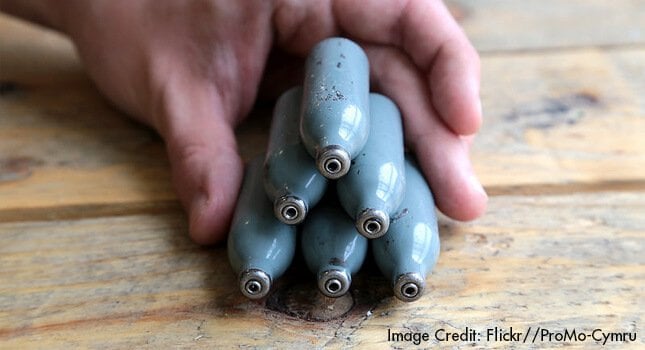 Singapore has seen its first case of nitrous oxide addiction, identified in a 20-year-old student, according to the country’s Institute of Mental Health.

Channel News Asia reported that the man’s family sought professional help after finding a large stash of “whippets” in his room—small dispensers of the substance also known as laughing gas.

Although it is illegal in countries like the UK, nitrous oxide is not banned Singapore, where it is frequently used as an anaesthetic in dentistry. It continues to be sold in canisters at bakeries—where it is an ingredient in aerosol whipped cream—and online, with a single whippet costing less than a dollar.

Laughing gas’ global popularity rose after the drug grew popular on the music festival scene, and at nightclubs and parties. In 2016, it was classified as the world’s “seventh most popular drug” with many first-time users experimenting with whippets in their teens.

When Does Nitrous Oxide Use Become an Addiction?

The 20-year-old man whose addiction to laughing gas was featured in the Institute of Mental Health’s journal reportedly started out using just one or two whippets each day. He said he had been suffering from major depression and the laughing gas gave him a feeling of brief euphoria, lasting a few seconds, and then allowed him to relax.

This escalated, he said, until he was using up to 100 whippets daily.

Dr. Lambert Low from the Institute of Mental Health says that there were clear signs that this patient had crossed the line from abuse to addiction, which was why the young man sought help.

Long-term, nitrous oxide abuse can cause damage to internal organs, as well as depression, anaemia, and overall numbness of the body. It can also contribute to a vitamin B deficiency. There is also an acute risk of overdose, which can cause suffocation, bleeding in the lungs, and even death.

What Help is Available?

In Singapore’s first documented case of laughing gas addiction, the patient also admitted to struggling with depression. When an individual suffers from both drug dependency and a mental illness, their issues are classified as “co-occurring disorders” and require a dual diagnosis and individualised treatment plan.

The team of psychiatrists, psychologists and addiction counsellors at the Cabin Singapore specialises in this area of recovery. They work with clients to prevent drug relapse—whether their struggle is with marijuana, cocaine, alcohol, or inhalants like laughing gas—and to develop coping skills to promote mental wellness and manage depression and anxiety.

Our outpatient program conveniently located in Singapore’s Novena Medical Centre allows you to continue to live your life and maintain your daily responsibilities while investing in better mental and physical health.

For those who could benefit from more immersive care, our inpatient centre at The Cabin Chiang Mai allows you to focus on your recovery in the safe and idyllic mountain landscape of northern Thailand.

Take A Step Toward Recovery Today

Whether your concern is for you or a loved one, call us for a confidential assessment on overcoming addiction and beginning the process of healing.

Seven Meth Addiction Signs You May Not Know